Another popular, fun exhibit at the World Maker Faire 2015 was this robot that draws figures using pancake dough. It's drawing board is a hot surface, ergo, the output is pancakes.

Watch the video below. Listen out for references to MC Escher and tessellated turtles.

Kids and adults love Kit Rex -- a dinosaur costume made out of cardboard. The makers of the costume say it started as a school project which generated lots of interest.

It was one of the most popular booths in the World Maker Faire and you'll see why in this video (below). Now it's got its own Kickstarter campaign.

SeeMore is more than just a kinetic sculpture. Each "leaf" here is a  Raspberry Pi computer node. A total of 255 computers can perform parallel computations. In this video, SeeMore is doing a map reduce search.

As work is distributed to a leaf, it folds out. As it completes its computation, it folds back in. The farther away it folds out, the more intense the processing it's doing. The search results are read out of a monitor beside the sculpture (not shown in this video).

It's mesmerizing to watch and listen to, as the nodes undulate in and out. 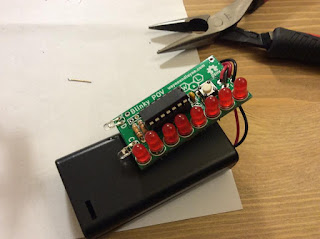 Google Drive offers a free Optical Character Recognition service. If you have scanned documents that you've always wanted to convert into searchable text files, try this.

Here is what Google says in its help page:


Optical Character Recognition (OCR) lets you convert images with text into text documents using automated computer algorithms. Images can be processed individually (.jpg, .png, and .gif files) or in multi-page PDF documents (.pdf). These are some of the types of files suitable for OCR:

This comicbook series is a superb adaptation of the Parker novels by Donald Westlake (writing as Richard Stark). Tightly written, cleverly plotted, and witty in unexpected places, the novels' protagonist is Robert Parker, a thief with a surprisingly strict and simple sense of moral code.

Parker returns from a long hiatus to go after Resnick, a former heist partner who betrayed Parker and left him for dead. Parker simply wants his money back, but things escalate quickly when Resnick asks for protection from a criminal syndicate known as The Outfit

. So Parker shifts his sights to get his money back from The Outfit, who somehow can't believe that Parker is crazy enough to go all the way to the top just just to recover, get this, the exact amount of money that Resnick stole. But Parker is a sociopath, and it is often said that many sociopaths are geniuses.

Parker executes a plan that, in the end, gets him back his money. How he does this is the highlight of the story, so I will not spoil your reading pleasure.

What is interesting about Parker's character is the turmoil of internal conflict operating within his psyche, which he all somehow controls with internal strength. Parker's world is ruled by fairness: you get what you deserve. If you take something from me unfairly, I will take it back from you, no more, no less. Parker will not hesitate to use force on violent adversaries but he will not tolerate harming people not involved in the conflict.